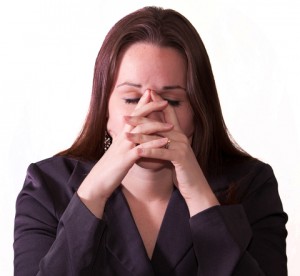 The problem is many people suffer from hypothyroidism for years before receiving diagnosis and treatment, raising their likelihood of developing brain-based issues–sufficient thyroid hormone is vital to good brain health. Thyroid hormones facilitate function of the brain’s neurotransmitters, chemicals that communicate information throughout the bran and body. They also prevent brain inflammation and reduce the risk of developing an autoimmune reaction in the brain. When doctors in the standard health care model fail to properly manage hypothyroidism, they increase their patients’ risks for brain-based disorders.

Neurotransmitters play a role in shaping who we are and how we perceive ourselves and the world around us. They influence our moods, memory and learning, self-esteem, anxiety levels, motivation, and more. I think this explains why some people who have been suffering for years with unresolved thyroid symptoms can become grouchy, angry, and pessimistic. That reflects not who they are necessarily, but instead their worsening brain function.

As neurotransmitter function begins to fail due to thyroid hormone deficiency, the brain’s cells increasingly lose the ability to communicate with one another. This lack of activity causes neurons to die, creating accelerated brain degeneration in those pathways. When it comes to brain health, if you don’t use it you lose it—inactive neurons are swept up and discarded by the brain’s immune system. This is a scenario that cause a variety of symptoms, one of the more common being depression.

For example, if your depression includes an inability to derive any joy from your hobbies, favorite foods, or other interests in your life that used to bring you happiness, you may have an issue with the serotonin pathway. If your depression includes poor motivation and constant self-doubt, the dysfunction may involve dopamine pathways. Depression with ongoing anxiety is common with GABA pathway issues. And depression with major loss of memory is common when acetylcholine pathways are impacted. In my brain book I discuss the symptoms of each neurotransmitter pathway in detail and give you strategies to support them. See the list of symptoms associated with each neurotransmitter in this Neurotransmitter Symptoms page.

Another mechanism to investigate if thyroid hormones did not resolve your depression is chronic inflammation. This is called the “cytokine model of depression” (cytokines are immune messengers).

Until recently, the treatment of depression has focused primarily on antidepressants or thyroid hormones. An entirely new model has since emerged known as either the “cytokine model of depression” or “inflammatory based depression.” In this model chronic inflammation of the brain decreases the speed of communication between neurons. The most common symptom of slowed communication between neurons is brain fog, however depression is common as well. If you have both depression and brain fog, this may be a model to consider, especially if you also have an autoimmune condition such as Hashimoto’s, leaky gut, gluten sensitivity, or some other chronic inflammatory disorder. I devote an entire chapter to brain inflammation and strategies to dampen it in my brain book.

One of the first things I do when evaluating a Hashimoto’s patient is find where else they have autoimmunity. It’s rare that a person with Hashimoto’s only has the one autoimmune condition as they typically react to other tissues, such as joints, skin, or intestines. In fact, the most common autoimmunity that co-exists with Hashimoto’s is brain autoimmunity, specifically in the cerebellum. The cerebellum is an area at the back of the brain that helps support balance, maintains muscle tone in the neck and back, and lets you know where you are spatially in the environment. People with cerebellum autoimmunity typically notice vertigo, difficulty with balance, chronic neck and back weakness, nausea while driving or moving their head quickly, and so on.

We often see cerebellum autoimmunity in patients with Hashimoto’s because it is triggered by gluten sensitivity, something that seems nearly universal among those with Hashimoto’s hypothyroidism. This is because gluten proteins are structurally similar to cerebellar proteins. When a person with gluten sensitivity eats gluten the immune system is triggered to attack the gluten. Because cerebellar tissue is so similar to gluten, the immune system attacks the cerebellum too, which is called cross-reactivity. This explains why gluten sensitivity can cause cerebellum symptoms. I devote an entire chapter devoted to neurological autoimmunity such as these in my new brain book Why Isn’t My Brain Working?

Don’t get depressed about brain disorders, get proactive

After I sent my last newsletter article about people with Hashimoto’s being at increased risk for brain degeneration, one Australian reader sent me an angry e-mail calling me an “arsehole.” I get it. As if you don’t have enough struggles and frustrations already, now here I am adding brain degeneration to the list of things to worry about.

As someone who reads many studies on a regular basis, I confess I can get a little clinical at times. However, my aim isn’t to scare you or piss you off, but rather to educate you. If one thing has been made strikingly clear to me over the past few years, it’s how terribly medicine is failing thyroid patients. Your doctor’s ignorance and neglect is not just frustrating, it’s putting your brain health at risk. By educating yourself you have the power to do something about your health rather than flail helplessly while it continues to degenerate. This is why I wrote my brain book–so you can learn how to start taking better care of your brain.

This is a video excerpt from a recent lecture for the Institute for Functional Medicine. In this video I show one of my patients who had gone for years with an undiagnosed hypothyroid condition. You can see the effect of her brain condition on her overall presence and then the difference after a few weeks of functional neurology therapy.

Datis Kharrazian: Developing the Clinical Eye to Discover the Causes of Fatigue from The Institute for Functional Med on Vimeo.

We need your support with Amazon reviews! 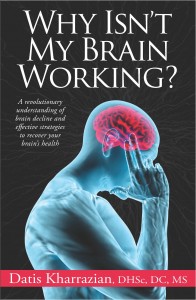 Amazon reviews are critical for any author. Many people determine whether to buy a book based on reviews. If you liked my new brain book I hope you will take a few minutes to leave a review on Amazon. It will help those who are looking for help with brain issues.

Although the book is large, I tried to make it easy to reference by listing symptoms at the beginning of each chapter to help you determine which are relevant, a summary at the end of each chapter, and a summary of the book’s key concepts and applications in the last chapter. I also shared some very personal and emotional patient stories to help the reader connect with real-life examples of concepts in the book. Finally, I referenced the book with scientific papers whenever possible, which resulted in more than, 1,000 peer-reviewed journal articles, so the reader can explore the science themselves.

During the past few weeks I did several podcast interviews to help explain some of the concepts in my new brain book, links below.

I had the pleasure of speaking at and sharing the stage with some distinguished researchers in the field of neuroimmunology at the 2013 conference for the International Association of Functional Neurology and Rehabilitation. These individuals are conducting groundbreaking research in areas such as how environmental toxins trigger autoimmunity, the effects of air pollution on children’s brains, and the immune mechanisms behind PANDAS, an autoimmune brain disorder triggered by step infection and other infections.

They include (from left to right) myself; Aristo Vojdani, PhD, a leading immunology researcher who has published more than 120 peer-reviewed papers and owns more than 15 US patents; Raed Mualem, PhD, senior vice president of the Nazareth Academic Institute; Madeline Cunningham, PhD, a leading researcher in PANDAS, PANS, autism, and other neuro-immune disorders; and Lilian Calderón-Garcidueñas, PhD, a leading toxicology and neurodevelopment researcher; and Disconnected Kids and Autism author Robert Melillo, DC, DACNB.

Not pictured is neuroscientist and moderator Gerry Leisman, PhD.