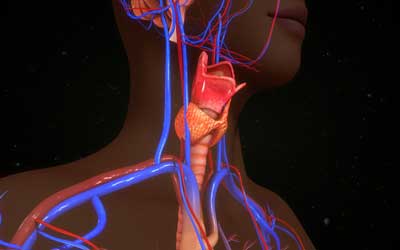 When we measure thyroid hormones, the three most common markers are TSH (thyroid stimulating hormone), free T4, and free T3. While TSH has gotten plenty of press over the years, free T4 and T3 are actually more accurate indications of thyroid function. Knowing their roles in the body, and in particular why free T3 is so important, makes it easier to put the big picture together when trying to understand your thyroid symptoms and labs.

Thyroid function is like a relay race, with hormones passing the baton from the hypothalamus in the brain to the pituitary gland beneath it, then to the thyroid gland, to the liver, and finally to cells throughout the body.

TSH goes straight to the thyroid gland where it triggers the production of a protein called thyroglobulin. The thyroglobulin joins up with four molecules of iodine to produce the thyroid hormone T4, or thyroxine.

About 94 percent of the hormone made in the thyroid gland is T4. The remaining 6 percent is triiodothyronine (T3), named for its three molecules of iodine.

These thyroid hormones hitch a ride through the bloodstream on thyroid-binding proteins, during which they are referred to as “bound.” When they are dropped off at the cells for active duty, they are called “free” hormones.

Although the thyroid gland secretes only a little T3, it is the most active form the body can use. T4 must be converted to T3 before the body can use it. Most of this conversion happens in the liver, but also take place in cells of the heart, muscle, gut, and nerves. These cells convert T4 to T3 with an enzyme called tetraidothyronine 5’ deiodinase, which removes one molecule of iodine.

In the end, only about 60 percent of T4 is converted into usable T3. Twenty percent becomes reverse T3 (rT3), an inactive form the body cannot use. Levels of rT3 can become too high in times of major trauma, surgery, or severe chronic illness. Another 20 percent of T4 can be converted to T3 by healthy gut bacteria in the digestive tract.

Liver and gut health are key to thyroid conversion

The liver has several channels through which it metabolizes hormones, filters toxins, and cleans the blood. Byproducts from these processes are dumped into the gallbladder for final removal.

Low thyroid function bogs down this whole process, making the liver and gallbladder sluggish and congested. And since thyroid hormones are converted into a usable form in the liver, you can see how hypothyroidism creates a vicious cycle of hindering liver function so that conversion of T4 to T3 suffers.

In addition, when the liver cannot properly break down hormones for elimination, they can go back into the bloodstream in an even more toxic form than when they entered the liver. This is especially true with estrogen. Elevated estrogen directly affects thyroid function by hampering the liver’s conversion of T4 to active T3, and by creating too many thyroid-binding proteins so that thyroid hormones can’t get into the body’s cells.

The intestines convert about 20 percent of T4 into T3, but only in the presence of enough healthy gut bacteria. We carry approximately four pounds of healthy bacteria in our colons. These bacteria serve many functions, one of which is to facilitate the conversion of T4 to T3. When diets are poor and digestion falters, an overabundance of bad bacteria occurs, crowding out the beneficial bacteria and hampering thyroid conversion.

Can you see why something as simple as antibiotic use, which knocks out all gut flora, good and bad, can dampen thyroid function? You can read more here about supporting healthy gut flora.

In my thyroid book I cover what I call the 4-R Program or restoring gut integrity: remove, reinoculate, replace, and restore. The reinoculate phase helps restore healthy gut bacteria necessary for T3 conversion.

Factors that prevent conversion of T4 to T3

Chronic stress is known to hinder thyroid conversion by:

Inflammation from gut infections, chronic viral infection, Lyme disease, food intolerances, molds, or environmental compounds can disrupt the conversion of T4 to T3. Finding the cause of inflammation and improving antioxidant status are keys to support. Note: Inadequate conversion of T4 to T3 often isn’t diagnosed because a low T3 level doesn’t affect TSH levels. Make sure your practitioner is willing to test for Free T3 and T4 along with TSH.

Anemia is a deal breaker for thyroid support of any kind, since anemia literally starves your body of oxygen. When your red blood cells are deprived of oxygen, basic functions that maintain, regenerate, and heal the body simply cannot operate adequately, if at all. A qualified health care provider should evaluate a person with anemia.

Be wary of iodine and tyrosine

If you’ve ever supported your thyroid naturally, chances are you recognize tyrosine and iodine, as they’re in most nutritional thyroid supplements. Although tyrosine and iodine are vital thyroid nutrients, research shows that supplementing with them may actually make a thyroid condition worse even though they can make a person feel more energetic:

Porcine thyroid glandular is derived from Argentina in which the animals are range fed and are free of hormones and chemicals and exceed USDA guidelines. This provides high quality glandular tissue that contains the needed amino acids, fatty acids, co-enzymes, and other supporting material for the thyroid. Porcine glandular tissue, as opposed to other types of tissue such as bovine, is the best source to support the thyroid.

Healthy hormone production, including the production of thyroid hormones, depends on essential fatty acids (EFAs). These nutrients can be found in cold-water fish and in many raw, unprocessed nuts and seeds. EFAs not only contribute nutrients for hormones, but also for proper cellular communication, brain function, and more.

The ideal ratio between omega-6 and omega-3 fats in EFAs is estimated to be from 1:1 to 4:1. Sadly, the average American’s ratio is more like 25:1, thanks to diets heavy in processed vegetable oils. You can find more information on EFAs in my thyroid and brain books and on my website.

Thyroid peroxidase (TPO) is the enzyme in the thyroid responsible for making thyroid hormones. It liberates iodine to be added to tyrosine for T4 and T3 production. This process involves many cofactors, including selenium, copper, magnesium, niacin, riboflavin, pyridoxal-5-phosphate (the active form of vitamin B6), and zinc. Make sure you are eating enough of these cofactors in food or via supplementation if you test deficient.

Zinc. It has been shown that low zinc status compromises T3 production. Studies have also demonstrated that zinc supplementation improves thyroid hormone production. These effects may be due to the cofactor role zinc plays with type I 5’ deiodinase. Zinc may also play a role in reducing thyroidal antibodies.

Commiphora muku (guggulu). The guggulsterones compounds in this herb have been shown to stimulate the healthy synthesis of T3 hormones. They also appear to have the ability to balance LDL cholesterol and decrease lipid peroxidation.

Selenium is the major cofactor for the enzyme 5’ deiodinase, which is responsible for converting T4 into T3 as well as degrading rT3 (reverse T3). Studies have confirmed lower production T3 in individuals with lower selenium status.

Withania somnifera (Ashwagandha) contains compounds that have been shown to have a stimulatory impact on both T3 and T4 hormone synthesis. Withania somnifera has also demonstrated the ability to modulate the release of harmful cortisol.

As you can see, there are many factors that come together to either support or break down the body’s ability to properly produce the usable form of thyroid hormone, T3. Remember that supporting liver function and gut health are key, as well as making sure address any stress and inflammation that may be hindering conversion.