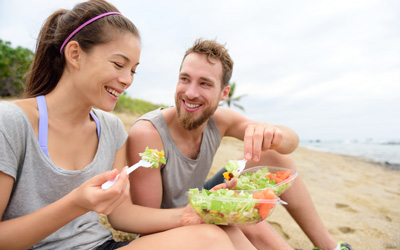 Reducing inflammation is integral to managing autoimmune disease and other chronic disorders. To be effective in reducing inflammation, it’s important to understand some basics. One great way to minimize inflammation is to support the immune system’s regulatory T cell function with simple dietary and lifestyle habits. These daily strategies can profoundly impact how you feel and often slow down the progression of your autoimmunity.

Immunologists have found two major immune responses that either dampen or activate the inflammatory, autoimmune response. These are known respectively as the T-helper 3 (TH-3) and T-helper 17 (TH-17) responses.

A TH-17 response stimulates autoimmunity. It’s like adding fuel to the fire of autoimmunity, and it’s a response you want to avoid activating.

The TH-3 response dampens inflammation through regulatory T cells (T reg cells). As the name implies, these cells help regulate inflammation and autoimmunity. But while T reg cells have the capacity to reduce the immune system’s inflammatory response, that doesn’t mean they always do their job well.

Fortunately, we know effective ways to encourage T reg cells to dampen the inflammatory response. This knowledge can be a major component of managing autoimmune symptoms. While some of these methods are simple dietary additions, others are lifestyle habits you can adopt into your daily rhythm.

Glutathione is an antioxidant made by your body to protect your tissue and it has several key mechanisms to support autoimmunity. Maintaining sufficient glutathione levels helps buffer the body from the many stressors hurled at us each day and can reduce our chances of developing autoimmunity.

Glutathione preserves and protects cells and neurons against inflammation, supports immune factors that dampen inflammation, supports regeneration of the blood-brain barrier and the intestinal barrier, and is a natural chelator that can bind to environmental compounds such as heavy metals and pollutants, which may trigger autoimmunity. Proper glutathione activity also regulates cell proliferation and immunity, and helps tissues recover from damage.

Although glutathione can be taken as a nutritional supplement, most forms are not absorbed well and do not raise levels within the cells.

Other methods of delivering glutathione include:

In my practice I use a mixture of botanical compounds that help the body make glutathione and recycle existing glutathione:

However, the RDA amounts of vitamin D are not enough to do the job.

Typical doses of vitamin D for autoimmune management can range anywhere from 5000 to 10000 IU per day. Some people take higher doses, especially if they have a genetic inability to absorb it sufficiently. But if you do, you should first test your vitamin D levels with a serum 25-hydroxy vitamin D test.

Your level should be around 50 ng/mL. Levels above 100 ng/mL may indicate a vitamin D overload. Most people with autoimmunity have low levels of vitamin D when tested. If you have autoimmunity make sure your levels are in a healthy range.

Good regulatory T cell function depends on a healthy balance of omega-3 and omega-6 essential fatty acids. However, most people get too much omega-6 from processed foods.

Foods that have healthy fats include seeds and nuts, cold water fish, avocadoes, and unheated olive oil. You may want to supplement with omega 3 EPA and DHA oils. If you don’t tolerate fish oil, algae oil or emu oil may be good options.

Many people make the mistake of not getting enough omega 3 fatty acids. For instance, research shows you need about 3500 mg of omega 3 per 2000 calories consumed per day.

Increase your body’s production of opioids

A great way to boost regulatory T cell activity is by increasing your body’s production of opioids by doing things that make you feel good in a positive way. My patients who have a positive outlook on life and have a healthy social support system see better results than those who have a negative attitude, live in toxic situations, or hold onto internal stressors.

Here are some ways to boost your body’s production of opioids:

It’s understandably difficult to be positive when facing health challenges. Nobody is asking you to be happy 24/7. But science shows practicing positivity and doing things that are rewarding and fun are very good for the immune system.

Of course, this approach can mean making some tough life decisions if you are in a toxic work, family, or relationship situation, all of which have been shown to be pro-inflammatory.

Don’t be too ambitious so that you feel pressured; it’s important for your immune system that you stick with small actions you will feel good about accomplishing. That feeling of accomplishment is just as important as what you do.

Short chain fatty acids (SCFA) are produced by the bacteria in your gut when you eat plant fibers. SCFA play a strong role in influencing regulatory T cells to dampen inflammation. You can help your body produce more SCFA by eating a primarily plant-based diet and continually varying the produce you eat.

You can also boost your SCFA levels through supplementation. This is especially beneficial for those whose fruit and vegetable consumption is limited due to small intestine bacterial overgrowth (SIBO) or other factors.

Even if you can eat vegetables, supplementing with SCFA may provide additional benefit.

However, you cannot obtain doses high enough from foods to be therapeutic and dampen autoimmunity. They must be isolated and concentrated in a nutritional product for the best effect.

I find the best way to take both resveratrol and curcumin is in an emulsified liquid. Research has shown that the emulsified liquid forms provide up to seven times the impact compared to oral tablets or capsules.

Dosage is hard to generalize because it is not based on body weight or age but instead on the degree of inflammation. You must use trial and error, starting with a standard initial dose and gradually increasing the amount until you obtain the best results.

Excess salt has been found to be an inflammatory trigger in those with autoimmunity. Westerners are guilty of eating about twice the recommended amount of sodium.

The USDA daily recommended intake of sodium is 2300 mg, which is the equivalent of only one teaspoon of salt. Some argue we need even less than that and get plenty from produce and meats. The average American consumes twice the recommended amount, which research has shown causes inflammatory changes in the immune system.

Those who have low blood pressure may consume extra salt in order to raise blood pressure. Low blood pressure means tissues in the body, including the brain, are not getting sufficient oxygen, nutrients, and other compounds. In this case, trial and error may be necessary to see what works. Glycyrrhiza, a compound in licorice root, may also be effective in raising blood pressure.

BPA, or bisphenol A, is a chemical most commonly found in plastics, fire retardants in furniture and sleepwear, and many other products. BPA has been shown to have a huge impact on immune tolerance.

It’s recommended to minimize your exposure as much as possible to BPA and other chemicals by choosing non-toxic household and body products. You can also add to your body’s defense mechanisms by using glutathione.

Avoid these common sources of BPA:

For more detailed information about T cells and their function, please see my thyroid and brain books.