In Episode 23 of Hashimoto’s: Solving the Puzzle episode I discuss the links between gluten sensitivity and Hashimoto’s. 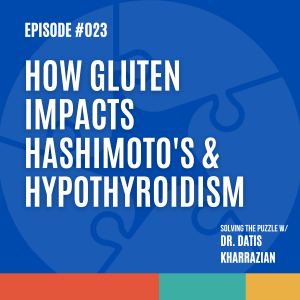 People with Hashimoto’s hypothyroidism are more genetically prone to gluten sensitivity and celiac disease. Standard gluten sensitivity testing misses numerous positive cases because they only test for alpha gliadin. In truth, people can react to multiple compounds in wheat, which should be included in immune reactivity testing.

Testing should also screen for the transglutaminase antibodies typically seen in celiac disease, a more severe reaction to gluten.

Keep reading below, or…

Listen on iTunes
(My podcast, Solving the Puzzle with Dr. Datis Kharrazian, is also available on all major podcast platforms.)

Celiac disease differs from gluten sensitivity in that it involves a specific gene type expression and turns on very aggressive immune cells that damage intestinal cells and cause systemic inflammation. This makes celiac disease a potent trigger for Hashimoto’s and other autoimmune diseases.

In fact, celiac disease can destroy the intestinal lining to the point a person develops malabsorption syndromes, nutritional deficiencies, and serious health problems.

Gluten sensitivity, on the other hand, doesn’t trigger as aggressive of a response, however it does play a role in triggering and exacerbating Hashimoto’s.

Studies say patients with Hashimoto’s should be screened for celiac disease and gluten sensitivity. Failure to go off gluten should these tests come back positive raises the risk of developing other autoimmune diseases in a short period of time.

It’s important to be 100 percent gluten-free if you have Hashimoto’s or other autoimmune diseases. Eating gluten on weekends or in small amounts will still trigger an immune response. It can take at least several weeks of eating gluten-free to begin to notice changes to your symptoms.

One of the most common questions I’m asked is, “Can I eat gluten again?” Typically, the answer is no, especially if you have celiac disease. People with autoimmune disease tend to have over active immune responses. Once antibodies are made against gluten, it often becomes a lifelong intolerance.

Cyrex Labs offers testing to help identify these various mechanisms and is the most thorough gluten sensitivity testing I’m aware of.

These are some of the concepts I teach in my course, Hashimoto’s: Solving the Puzzle. Together, we go over how to use diet, nutrition, lifestyle, and nutraceutical approaches to personalize a plan based on your unique needs.

I walk you through the steps of managing your condition and give you questionnaires, recipes, and nutritional strategies.