What type of gluten intolerance do you have? 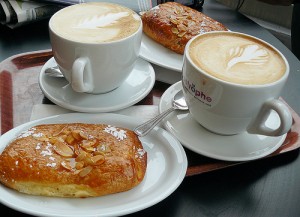 Dairy commonly triggers a gluten-like reaction. Surprisingly coffee can too. If symptoms don’t improve on a GF diet, these may be the culprits.

Gluten intolerance has been linked in the literature to 55 diseases so far, most of them autoimmune. Fortunately a revolutionary breakthrough in gluten reactivity testing at Cyrex Labs, founded on years of leading immunological research, is now available to help determine whether this ubiquitous substance is damaging your health.

Previously it was thought that the effects of gluten were limited to celiac disease, and strictly gut-oriented, such as bloating, gas, and abdominal pain. Thanks to ongoing research, we now know the effect of gluten on brain and nervous tissue is significantly worse and more far-reaching than we ever realized.

It’s estimated that in celiac disease, some patients have no gut symptoms, but instead experience neurologic and psychiatric symptoms. Some even experience no symptoms at all, while the gut and other body systems are still being damaged. These newly-discovered presentations of the disease are changing the face of celiac diagnosis and treatment.

What’s more, we now have a tome of research establishing the existence of non-celiac gluten sensitivity (NCGS), a condition researchers say affects up to 6 times the numbers of celiac disease. In NCGS, symptoms may be limited to the gut, but a growing body of research shows that in some individuals, NCGS can have significant impacts on the brain.

With the prevalence of neurologic effects due to gluten, proper testing is clearly a high priority for patients.

Problems with the old standard of tests for gluten intolerance

Thanks to an ongoing tradition of poor lab testing and general misinformation many people continue to eat gluten, unaware it is harming them:

Blood tests. The old standard of blood tests for gluten intolerance have a less than 30 percent accuracy rate. Would you tolerate that accuracy rate for cancer, heart disease, or pregnancy test?

Salivary tests. Most salivary tests produce false negatives due to the assessment of only one antibody of one wheat protein, while many gluten-based proteins exist that people can react to. Cyrex Labs offers salivary testing that screens for more than one type of antibody.

Stool tests. Stool tests produce false negative and false positives due to specimen-interfering factors that alter the outcome of results.

The old standard of tests screen for only one component of wheat.

Being gluten-intolerant isn’t as black and white as once thought. Actually “gluten” is a misnomer; gliadinis the portion of wheat that triggers an immune response. (Since “gluten” is commonly used I will stick with that term).

It has been discovered wheat is made up of more than 100 different components that can cause a reaction, not just one. The problem is, a person can react to only one ofthe many proteins in wheat, or a combination of proteins, peptides, and enzymes associated with wheat. Therefore, testing for only one is like pitching a pebble into a quarry and trying to find it.

Meanwhile practitioners still use the old tests, patients are told they are not reactive, and they continue to suffer.

Cyrex Labs hones in on the specifics of gluten intolerance

After many years of research and development Cyrex Labs in Arizona offers comprehensive and highly accurate testing for gluten intolerance. It’s time all practitioners get on board with these new test methods.

Cyrex Labs tests for 23 of the most antigenic (meaning most likely to provoke a reaction) pathogens associated with wheat and gluten.

Cyrex also offers testing for gluten cross-reactivity. For instance, eating dairy can trigger a gluten-like immune response because the body sees their protein structure as one and the same. Knowing about cross-reactivity helps patients to eliminate a source of added symptoms and bodily damage.

Cyrex was founded by Aristo Vojdani, Ph.D., M.Sc., C.L.S., a leading researcher in the fields of autoimmune disease and neuroimmunology who has published 120 peer-reviewed articles in scientific journals. As new research expands our collective knowledge about reactivity to food and environmental factors, Cyrex expands its offering of test arrays.

Cyrex offers these tests in relation to gluten sensitivity

This test identifies how gluten is robbing you of gut health.Gluten causes inflammation in the gut, which eventually leads to intestinal permeability, or “leaky gut.” Leaky gut allows undigested food particles, bacteria, and other pathogens to escape into the bloodstream where they can trigger sensitivities, allergies, and inflammation in other parts of the body.

This test pinpoints which of these is causing leaky gut so your practitioner knows what to specifically target for faster and more efficient gut repair.

A highly sensitive and accurate measure of gluten reactivity, this is a great test for people who have a family history of autoimmune disease, even if they’re asymptomatic. Since so many autoimmune diseases are triggered by gluten, this test shows the patient a gluten-free diet can prevent him or her from going down the same road as family members.

Array 3X measures 23 factors: antibody production against 8 wheat proteins and peptides, 3 essential structure enzymes and the gliadin-transglutaminase complex. Until recently testing for gluten intolerance was against only oneof those components, alpha gliadin. Surprisingly, many practitioners still use this outdated testing. Through extensive research Cyrex pinpointed the other components of wheat that most often provoke an immune response.

This test greatly expands the parameters of gluten intolerance testing, catching those who may have previously tested negative because they don’t react to the alpha gliadin.

Note: If a patient is completely gluten-free for more than four weeks before the test, there is a potential for a false negative result. Array 4 (below) was designed for a patient already on a gluten-free diet.

Gliadin IgA + IgG antibodies. IgA and IgG antibodies, the two primary antibodies involved in an immune intolerance, are used to screen for gluten intolerance. Screening for both gives a more accurate view of immune status.

Opioid testing
Array 3X also tests for whether gluten has a drug-like opiate effect on an individual. Some people have enzymes in their digestive tract that break gluten down into opioids that act like heroin or morphine. Embarking on a gluten-free diet can cause terrible withdrawal symptoms in these people. One practitioner tells of a patient whose withdrawal symptoms were so severe she went to the emergency room.

Another problem with opioids is they disrupt brain function by attaching to receptor sites normally meant for neurotransmitters. Neurotransmitters are brain chemicals that help dictate our personality, moods, behavior, bodily function, and more.

This opioid effect on neurotransmitter receptors explains why gluten plays a role in so many cases of ADD/ADHD, autism, or behavioral problems in children; or brain fog, depression, anxiety, and migraines in adults. When one mother put her autistic son on a gluten-free diet, he began eating the binding out of books as he was so desperate for his gluten-opioid “fix” (glue commonly contains gluten).

Array 3X screens for antibodies to the opioids, which signals their presence in the brain.

Twenty-four foods known to cross-react with gluten or are newly introduced to a gluten-free diet.

One of the most frustrating scenarios for both the practitioner and the patient is when a gluten-free diet fails to have any effect on a person who seems so clearly gluten-intolerant. Newer research shows this may be due to cross-reactivity.

Amaranth and quinoa
When people go on a gluten-free diet, they commonly consume foods they haven’t eaten before. Array 4 tests for such foods, such as amaranth or quinoa. Never having been exposed to these foods could trigger the immune to respond as if these grains were foreign intruders, especially in the case of a leaky and inflamed gut.

Dairy
Cross-reactivity is common with dairy as its structure so closely resembles that of gluten. In fact 50 percent of people who are sensitive to gluten are also sensitive to dairy.

This panel has great clinical significance as it explains why people still react even after giving up gluten and even dairy.

For more information on food reactivity after starting an elimination diet, see my article on loss of oral tolerance.

Which parts of the body are affected by gluten intolerance.

Array 5 measures predictive antibodies, which can appear up to ten years before any clinical symptoms. It also assesses possible tissue damage to multiple organs of the body.

People typically shrug off the possibility of a gluten intolerance by saying, “I don’t have any digestive problems.” Little do they know that gluten produces digestive symptoms in only a minority of people — while damage is still occurring. For the majority gluten damages the brain, the heart, the skin, the respiratory tract, or the joints. This test measures antibodies to target sites such as thyroid, blood, brain, reproductive organs, heart, and more.

Arrays 6, 7, and 8 test for subsets of the complete autoimmunity screen, focusing on neurological, diabetes, and joint autoimmunity respectively.

If your immune system is depleted, you may not be able to produce enough antibodies to be caught on a test, even if your body is reacting to them.

It’s useful to screen for your total antibody counts first to ensure accurate test results. You can do this with a total immunoglobulin test.

Antibodies are used in testing to determine whether the immune system is reacting to something. Secretory IgA, a type of antibody, is manufactured in the mucosa of the gut lining. Its job is to keep invading pathogens, such as viruses, bacteria and food proteins from attaching to the gut lining.

When the layer of mucosa that protects the lining of the digestive tract breaks down or becomes dysfunctional, total secretory IgA may be too low or too high. This means you could have too few or too many antibodies to test properly, even though you are gluten-intolerant. This marker screens for that.

For those with low SIgA, repairing its function may be necessary before further immune testing can be done accurately.

How do I arrange a Cyrex test?

All Cyrex tests are provided through a licensed healthcare practitioner who has an account with Cyrex. These include MDs and DOs in all states; NDs, DCs, and DOMs in most states; and LAcs, PAs, RDs, and NPs in some states.

Will medications, foods, medical conditions or other factors interfere with my test result?

In some cases, yes. Immunosuppressant and corticosteroid drugs can reduce antibody counts and cause false negative test results. In limited assessments on the effects of aspirin, acetaminophen, and antipsychotics on Arrays 2-4 have been performed, and no noticeable effects were observed.

It is also possible that an unknown cross-reaction to a food and/or microorganisms may stimulate antibody production in the absence of a true antigen. This often produces a high number of false positives.

If you are gluten-free for more than four weeks, it’s possible to have a false negative test result on Array 3X. Array 4 was designed for those already on a gluten-free diet.

As I mentioned in this article, many practitioners are still unaware of the need to test for more than one factor of gluten (alpha-gliadin). Make sure to ask what factors are being tested, and request Cyrex for the most accurate and up-to-date testing.

For more information on Cyrex’s Arrays, see their information-packed patient website, and their FAQ on their testing website.

NOTE: This article was originally published in 2011 and updated in 2018